A house is more than just a building, it’s a home, and a lot of living happened at the Former North Dakota Governors' Mansion at 320 East Avenue B.

The building itself was constructed in the Stick Style in 1884 as the private home of Asa Fisher, president of the First National Bank. Fisher sold the house to the state in 1893, for the princely sum of $5,000. From that time until the current North Dakota Governor’s Residence was built in 1960, the mansion housed 20 North Dakota governors and their families.

During the Bill Langer administration in the 1930s, relatives relate how the governor would return to the house from his office in the Capitol late in the day and would often see that

there were people waiting to talk with him in the front parlor. To avoid them, Langer would sneak in through the back shed into the kitchen and up the servant’s stairs, refusing to come down until the visitors left.

died in the house in 1898 of tuberculosis. That much is known. Folklore has it that he died coming out of the bathroom, and Governor Burke’s butler, Tom, eventually refused to sleep in the house alone because he thought Governor Briggs haunted it.

Tom sometimes slept on the sleeping porch that used to surround the second story. Some of the governors’ children also slept there, as did others when the weather was hot and sticky.

After the last governor moved out of the house in 1960, it housed the North Dakota Psychiatric Clinic until 1968 and administrative offices of the State Health Department until 1975, when it was given to the State Historical Society of North Dakota, with the idea that it would operate as a museum. 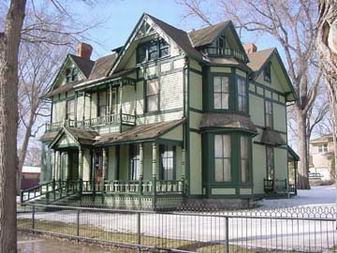 The house underwent extensive restoration work to return it to the way it looked when the first governor lived there, and you can view the various style changes the house has undergone over the years as part of the exhibit.

The site includes the two-and-a-half story mansion and the restored carriage house in the back. The carriage house was built in 1903 and was used mainly as a garage and workroom.

There was also an apartment on the second floor, where the governor’s caretaker lived.