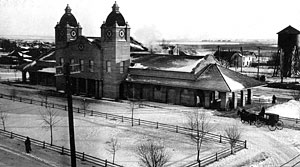 The role of the Northern Pacific Railroad in the founding and development of the Bismarck community was significant. The NP Depot remains as a symbol of that importance.

In August, 1898, The St. Paul Globe reported the Northern Pacific Railway’s intention to build a new depot and office building in Bismarck, N.D. The Globe reported that the new building would replace a framed freight depot built in the 1870’s and destroyed by fire in 1898. According to the article, the Bismarck depot, designed by the nationally prominent architectural firm of Charles Reed and Allan Stem of St. Paul, would be “one of the finest depots and freight offices on the (Northern Pacific’s) system, and one that all the people of that city (Bismarck) can desire from an architectural standpoint.” 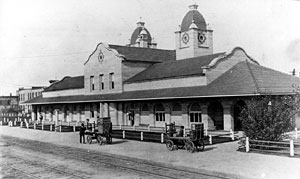 Completed in December, 1901, at a cost of $33,601, the Northern Pacific Depot is notable for its Spanish mission-style architecture, uncommon on the Northern Plains. The new depot was built on a site that had previously been the location of the 1877 Sheridan House, at one time Bismarck’s leading hotel and the largest building erected in Dakota Territory. The Sheridan House, which had served as both a hotel and railway passenger depot, was moved east across Fifth Street, where it was remodeled and reopened as the Northwest Hotel.

The Northern Pacific Depot’s Spanish mission-style architecture featured a center façade flanked by towers 13 feet square, originally domed and crowned by louvered cupolas with bellcast roofs and finials. The superstructures of these towers (domed roofs, cupolas, and corner caps) were removed in 1954 and replaced by simple peaked tile roofs, producing the effect of Tuscan campaniles. The main entrance of the depot is recessed between the towers within a one-story portico featuring six concrete Tuscan columns. 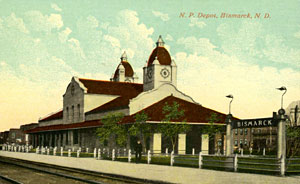 The east and west portions of the Northern Pacific Depot repeated the shaped gable ends of the central block with their longitudinal axes placed at right angles to it. The original roofing of these wings was red Ludowic tiles, which were also replaced during the tower alterations in 1954. These wings originally terminated in 20-foot square shelters or covered platforms with open arches. A large first floor central block contained cherry-trimmed ticket and trainmen’s offices on the south side and men and women’s lounges on the north side. The west wing was completely enclosed in 1930 to create a new express office and the east end was enclosed in 1955. 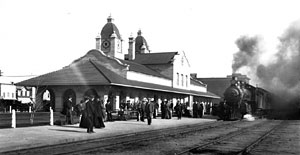 Originally the Northern Pacific Depot grounds between Fourth and Fifth Streets were enclosed with post and rail fencing. The grounds were planted with grass and trees, and at the southeast corner an enamel and wrought iron sign reading “Bismarck” was supported by two Tuscan columns.

By 1916, the Northern Pacific Depot was serving 24 passenger trains daily. By 1950, however, Bismarck began to reflect the nationwide decline in railroad traffic. The decline continued throughout the 1970’s as mergers between the Northern Pacific and other railroads eventually created the Burlington Northern and Santa Fe. Ultimately, the Railway Express Agency vacated its quarters in the west end of the Bismarck Depot following a declaration of bankruptcy in 1975. Today the old Northern Pacific Depot is home to the Fiesta Villa Mexican Restaurant.